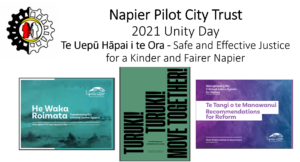 The 2021 Unity Day was an outstanding success.  We had well over 100 registrations and during the day numbers exceeded this.  The focus of the day was on the changes proposed by the Hon. Chester Borrows led Safe and Effective Justice Advisory Group-Te Uepū Hāpai i te Ora and share ideas.

The day was livestreamed and you can access a recording of this at this link:

Turuki! Turuki! Transforming our criminal justice system to heal not harm. Te Uepū Hāpai i te Ora: The Safe and Effective Justice Advisory Group. Get the Turuki! Turuki! Report here. This builds upon He Waka Roimata a report released in June 2019 and echoes the words of Moana Jackson in He Whaipaanga Hou from 1988